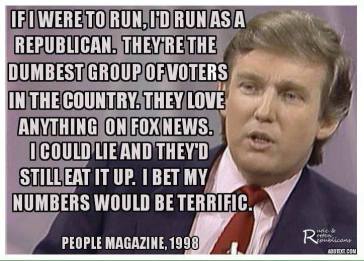 Donald Trump is a self-proclaimed sexual predator, accused of assaulting at least 23 women, and had two proven affairs after son Barron was born to Melania. He has no morals.

Trump settled out of court when sued by men and women who had been enrolled in his fraudulent Trump University. It was a criminal act which he escaped by paying off his accusers.

For years Trump embezzled money from his “foundation” and used these funds for his personal use. Part of the funds were used for his 2016 campaign, and a judge ruled against the orange man in the state of New York.

“I direct Mr. Trump to pay the $2,000,000, which would have gone to the Foundation if it were still in existence, on a pro rata basis to the Approved Recipients,” Judge Saliann Scarpulla wrote.

The court ordered Trump to personally pay the money; it cannot come from campaign donations or from the millions left over from his small inauguration.

Trump used the money from his “foundation” to fight a lawsuit in Palm Beach involving a flagpole and to have a life-size portrait of himself created among other crimes. Here’s the egregious lie Trump told relating to this story in 2018.

“The sleazy New York Democrats, and their now disgraced (and run out of town) A.G. Eric Schneiderman, are doing everything they can to sue me on a foundation that took in $18,800,000 and gave out to charity more money than it took in, $19,200,000,” the president said in a tweet referencing the former state attorney general.

This was proven in court to be 100 percent false. But I repeat myself for what is likely ten-thousand individual instances. Sorry for being redundant.

The Trump Klan’s history is filled with stories of fraud and deceit. From Friedrich Drumpf; (who changed his name to  ‘Trump,’) who immigrated to America in 1885, to Frederick Trump, and on to Donald Trump and his Klan there are allegations of con-games and pure fraud. There is also a family history of racism and bigotry. There is no record of one of the family donating a dollar to charity, but they learned how to steal money from them.

Please tell others about my blog; the truth lives here. I continue to boycott the right-wing social media, Facebook.