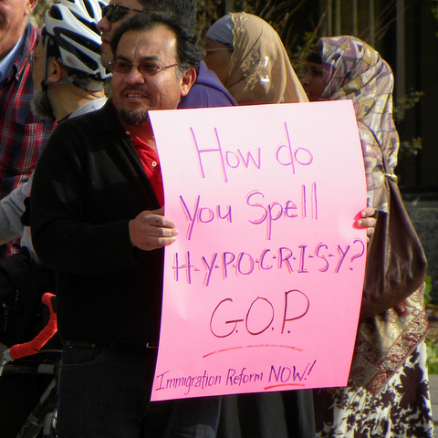 “The nondelegation doctrine (sometimes hyphenated as non-delegation doctrine) is a principle of constitutional and administrative law that holds that legislative bodies cannot delegate their legislative powers to executive agencies or private entities. In other words, lawmakers cannot allow others to make laws. In the context of the federal government, the doctrine comes from an interpretation of Article I of the United States Constitution and the separation of powers principle. Under a strict application of the nondelegation doctrine, Congress would not be allowed to let the president, administrative agencies, private corporations, or courts to pass laws.”

This is the primary requirement of Article one of the Constitution, and proof that Republicans violate the Constitution every day Donald John Trump is in office. Beginning in January 2017, Moscow Mitch McConnell and Lyin Paul Ryan surrendered their power and their responsibilities to their illegitimate president.

Every vile piece of legislation produced by Republicans comes directly from the White House. Trumpcare, his misnamed “tax reform,” attempts to halt Trump’s impeachment which was required by the Constitution, were all submissions to Trump’s demands. Republicans must recognize the fact that Trump is an elected public servant, not a monarch.

Moscow Mitch has allowed Trump to be an autocrat. His abuse of power will be legendary throughout our nation’s history, but he could not have done it alone. Moscow Mitch is the traitor who gave Trump the powers of the legislative branch. When Trump tells Moscow Mitch to jump, he asks “how high.”

The evidence and testimony presented at Trump’s impeachment hearings were enormous in volume and unquestioned for their validity and detail. Contrary to Trump’s incompetent lawyers, abuse of power by the President of the United States is a Constitutional violation which demands his or her removal from office.

Republicans are lying as they attempt to protect their fuhrer. Every effort to save DJT from his own actions; from the facts presented before Congress; is another attack on the Constitution.

The truth: Trump is not only guilty for his illegal efforts in Ukraine, he is guilty for multiple crimes. In the Mueller report more than 10 instances were listed when he attempted to obstruct justice. His actions and orders on our southern border violated the human rights of men, women, and children whose only crimes were seeking asylum from the tyranny of leaders in their own countries.

A white supremacist cannot be allowed to defile the White House for another day. The President of the United States must be a patriotic American. DJT is not worthy of wearing the label of America’s president; he is a disgrace to all 44 presidents who preceded him, and several of them failed the American people.

If you choose to remain loyal to Trump, you are either in denial, or share his beliefs in racism, Islamophobia, homophobia, and misogyny. There are only two choices in today’s America; Trump, or the country of our founding fathers and supporting the Constitution they wrote in 1787.

Republicans have become the enemy of the American people; and the American people are the country. Saving your country is easy. Simply go to your designated polling place on November 3, 2020 and cast your ballot for men and women who will serve you and therefore the United States of America. Remember; it’s your country, not the nation of these Republicans in name only; and certainly not of DJT.

My eight novels are now available on Amazon; the Kindle app is a free download; CLICK HERE