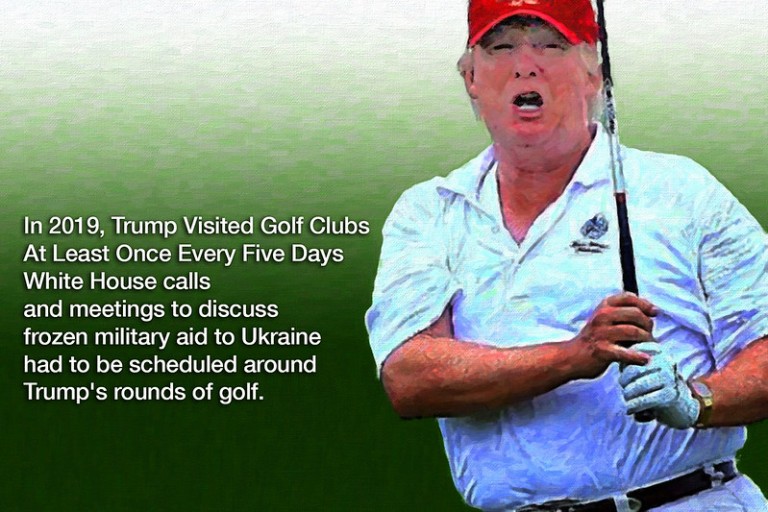 During the last few days Trump made a visit to India. The reason for this costly excursion was a creation of his campaign staff. The truth is that it was an opportunity to use taxpayer money for a vacation to a country he had never visited. Trump, trophy wife, Melania, son-in-law, Jared Kushner, and the woman he considers his only child, Ivanka, took in the sights of one of our remaining allies, including the Taj Mahal.

Trump has never been able to deliver a single coherent and meaningful speech, and that didn’t change in India. 100,000 people tried to listen as he misspoke every Indian name on the teleprompter. Once again, he embarrassed himself and our nation.

Meanwhile the spread of the coronavirus has increased rapidly. As of yesterday, more than 78,000 people have been infected. So, what action has your illegitimate president taken to protect the people of his country? He cut funding for the Center for Disease Control. In one speech the ignorant buffoon claimed that “warm weather would end the threat.”

“The view in the White House is that this is one of those classic black swan events, and all we can do is control the health issues in the U.S.,” said Stephen Moore, an informal economic adviser to the Trump team.

In other words, ‘ignore it and it will go away.’ Currently only 53 individuals have tested positive for the virus, in the United States, but that could rapidly change. The symptoms are not always obvious, and how it is spread has yet to be determined.

A side effect of the virus is its effect on the Dow Industrials. On Monday it suffered a 1,000 point plunge; the biggest in over two years.

“Trump’s reelection effort is so closely tied to the strength of the stock market and the economy,” said Moore, a distinguished visiting fellow at the Heritage Foundation and 2016 Trump campaign adviser. “Anything that shakes us off of that pro-growth track is a concern, but I think the view of officials in the White House is that this will be contained.”

“Once the virus is contained, the market will bounce right back,” Moore added.

Leading economists are not quite as positive about this statement. Tariffs remain in place and a trade agreement between the world’s two largest economies is no nearer today than it was months ago. The deficit will continue to grow by more than one-trillion dollars each year, according to men and women who understand fiscal responsibility. Everyone who understands economics is aware that huge, growing deficits cannot sustain the economic successes begun by President Barrack Obama.

The next eight months will decide our nation’s future, and the direction the entire world will follow for many years to come. The United States can return to a path begun by a great president, Barrack Obama, which will make us a great nation, or continue Trump’s efforts to replace democracy with fascism; a nation where only the super-wealthy enjoy the “American way of life;” where minorities, non-fake-Christians, and low income and the poor became slaves for the government and one-percent of all Americans.

I am an American, and was proud of that fact prior to Trump’s illegitimate election. Trump’s America is not my America and he will never be my president. We all deserve better; we all deserve a real American working for all of the people in the Oval Office. She or he must work for us longer than one or two hours each day.

Please vote on November 3rd. You can save our country. It belongs to us, not to a political party.

My eight novels, including “Tales from Between the Sheets,” are now available on Amazon; CLICK HERE; the Kindle app is a free download