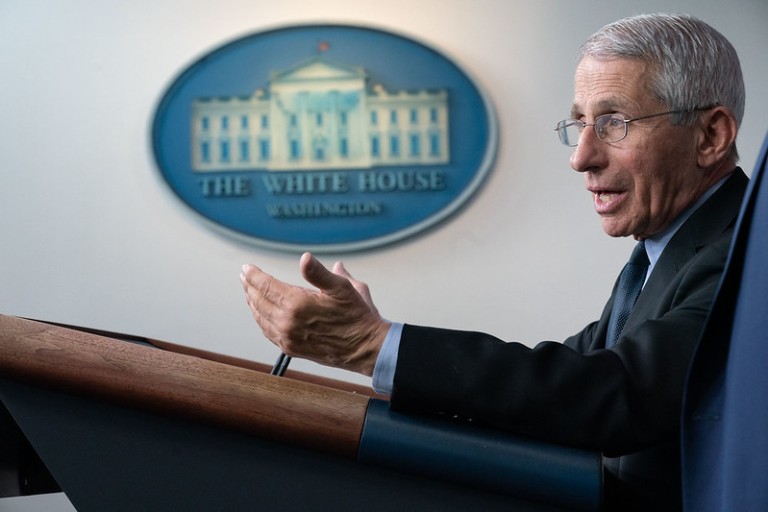 Trump wants to fire Dr. Anthony Fauci: why? Dr. Fauci told the truth and the greatest enemy to the illegitimate presidency of DJT is the truth.

“I mean, obviously, you could logically say that if you had a process that was ongoing and you started mitigation earlier, you could have saved lives,” Fauci, the nation’s top infectious disease expert, told CNN’s Jake Tapper on “State of the Union” when asked if social distancing and stay-at-home measures could have prevented deaths had they been put in place in February, instead of mid-March.

“Obviously, no one is going to deny that. But what goes into those decisions is complicated,” added Fauci, who is a key member of the Trump administration’s coronavirus task force. “But you’re right, I mean, obviously, if we had right from the very beginning shut everything down, it may have been a little bit different. But there was a lot of pushback about shutting things down back then.”

For two months Trump ignored science. The coronavirus was becoming a pandemic and America would be targeted by the virus severely if we were not prepared. Trump did nothing and as of today there are 560,433 cases in the United States and 22,115 Americans have lost their lives related to the pandemic. Thousands of the lives lost are the responsibility of one man: Donald John Trump.

In an interview with CNN’s Jake Tapper, America’s foremost authority on contagious disease said the following.

Asked why the President didn’t recommend social distancing guidelines until mid-March — about three weeks after the nation’s top health experts recommended they be put in place — Fauci said, “You know, Jake, as I have said many times, we look at it from a pure health standpoint. We make a recommendation. Often, the recommendation is taken. Sometimes it’s not. But we — it is what it is. We are where we are right now.”

The truth is that the orange buffoon was more concerned about America’s economy than the safety of 330 million people.

This crisis has proven once and for all that DJT is the worst and least qualified man to ever claim the title of President of the United States of America.

My eight novels, including “Four More Years,” are exclusively available on Amazon; click HERE; the Kindle app is a free download