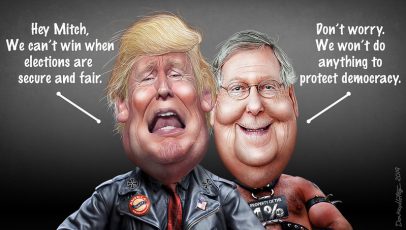 Democrats in Washington often claim that their Republican counterparts do not respect or like Donald Trump, and yet they support his agenda and protect his presidency. You might ask “why.” Let’s tell the story of the real leader of this Republican Party in name only, Moscow Mitch McConnell.

I’ll begin with their number one desire, to win elections. There are no “Reagan Democrats” today. The largest non-partisan group, Independents, are rejecting Trump’s fascist agenda and his hypocritical party. If any Republican candidate does the right thing and stand up to the schoolyard bully, they will lose elections. The only votes they can count on are from Trump’s cult.

Second, Republicans, especially Moscow Mitch, have an agenda which is extreme and opposes the essence of the Constitution. The media is busy paying attention to Trump’s ridiculous and moronic actions. Republicans are able to reject hundreds of bills passed in the Democratically controlled House, and confirm extremist federal judges and address other issues which will move America back to its dark days. Racism and bigotry abound on the right side of the aisle, and it is very possible that in January 2021 both houses of congress will be under Democratic control, so they are “working” as quickly as possible to destroy democracy in America.

Moscow Mitch saved Trump’s humongous derriere by rigging his impeachment trial, but how does he really feel about the orange buffoon?

A writer for the New Yorker, Jane Mayer, talked to Republican insiders and wrote the following.

“Although the two men almost always support each other in public, several members of McConnell’s innermost circle told me that in private things are quite different. They say that behind Trump’s back McConnell has called the President ‘nuts,’ and made clear that he considers himself smarter than Trump, and that he ‘can’t stand him.’ (A spokesman for McConnell, who declined to be interviewed, denies this.),” Mayer wrote. “According to one such acquaintance, McConnell said that Trump resembles a politician he loathes: Roy Moore, the demagogic former chief justice of the Alabama Supreme Court, whose 2017 campaign for an open U.S. Senate seat was upended by allegations that he’d preyed on teen-age girls. (Moore denies them.) ‘They’re so much alike,’ McConnell told the acquaintance.”

Sadly, Moscow Mitch has consistently ignored his oath of office and acted in a manner which benefits himself and his party while ignoring the people of Kentucky and our nation. For forty years the right-wing has supported the one percent  and ignored the working class. He is up for reelection in November. I hope the people of Kentucky vote for themselves and against the old failure in the senate.

My eight novels, including “Tales from Between the Sheets,” are exclusively available on Amazon; click HERE; the Kindle app is a free download