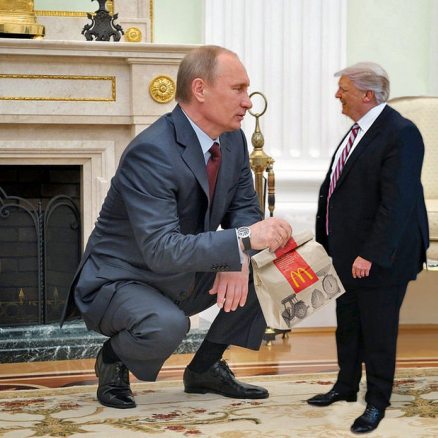 My research over the last five years has convinced me of a single, very frightening fact. The collusion during the 2016 election between Trump and Vladimir Putin was far more treacherous and treasonous than most Americans could imagine. Even more frightening, the television media and one entire political party are complicit in the “rigging” of our presidential election.

To understand the history and the facts of a long relationship between Trump and Putin, we must return to 1987. An invitation by the KGB to an  ambitious 41-year-old businessman was accepted. Trump traveled to Moscow and attended meetings with the Soviet spy agency.

During this time Putin was a high-ranking officer in the KGB. There is no record of the events, but at some point, there is little doubt that this was the first face to face meeting between Trump and his current ‘handler.’

The CIA knew Putin very well. His personal ambition was to destroy the United States of America, and remains so to this day. However, when the USSR was disbanded on December 25, 1991, Putin had become wiser and more enlightened.

The events of the previous few years convinced Putin that a war between the world’s two most powerful nuclear arsenals was unwinnable. He began an effort to become Russia’s political leader and formed a three-pronged plan to destroy America.

In August of 1999 Boris Yeltsin appointed Putin Prime Minister, the second highest position in the nation’s government. In a surprise decision Yeltsin stepped down on New Year’s Eve in that same year. Putin became the acting President of Russia and was formally elected in March of 2000. The rest is history. Today Putin is an autocrat; elections are as big a sham as Trump’s impeachment trial in the senate last February.

In 2005 Trump made an official trip to Moscow. His “Miss Universe Pageant” was held in Russia’s capital. In the United States his businesses were in danger of collapse. After returning from his “beauty pageant,” his real estate interests began to flourish. Why? Many of us have reasonable assumptions, but Trump has refused to release his income tax returns to the American people.

Common sense says that Trump and Putin enhanced their relationship during this event.

In 2013 Trump once again took the Miss Universe Pageant to Moscow. The events which occurred during this period were documented by former MI6 agent Christopher Steele. Not one of Mr. Steele’s claims has been proven false. However, William Barr’s Department of Justice claims that it is all a Democratic plot to remove Trump from Washington. Every other nation in the world accepts the dossier as valid.

The consensus of the document is that Trump and Putin discussed plans to place the egomaniac in the White House. In order for Putin to accomplish his goals he needed a puppet in the White House who would serve his needs and destroy America from within. Praising Trump, knowing that he was a mentally challenged egomaniac, made the failed American businessman a tool of the Russian president. Trump’s weakness became Putin’s greatest strength.

Step one: weaken or destroy NATO by destroying America’s relationship with its closest allies. Trump took the first steps to accomplish this goal at the G7 Summit early in 2017. America became the only developed nation not to sign the Paris Accord, promising to reduce carbon emissions.

Step two: end America’s status as the ‘wealthiest nation in the world.’ Prior to the current pandemic, our nation was moving towards another recession. A very unwise decision to begin a trade war with the second largest economy in the world, China, harmed American businesses and destroyed many family farms. His “tax reform” lowered the maximum corporate tax rate to a level which allowed some of our nation’s largest companies, including Amazon, and Walmart, paid zero dollars in taxes in 2019. In a single year the deficit rose by one-trillion dollars.

Step three: divide our nation’s people, creating a virtual second Civil War. This has weakened our nation from the inside out. The size of our military is of little importance if the American people remain separated and choose not to support the Constitution and join together to fight a common enemy. Not since the first Civil War has America been so divided.

Putin is watching all three of his goals become reality. If Trump is allowed to continue serving his puppeteer, in just a few years the Russian president will control the two most powerful nations in the world and achieve world domination.

This is not a “right-wing conspiracy theory:” just look at the facts.

Your vote can save America in November.

My eight novels are available onAmazon