There is only one word for what caused the death of George Floyd in Minneapolis, and that word is “murder.” Mr. Floyd was a black man who was detained by police officer Derek Chauvin. He knelt on the man’s neck for eight-minutes and forty-five seconds, until he died. The recording revealed that Mr. Floyd continued to tell the officer, “I can’t breathe.”

Chauvin and three other officers were fired, and after a brief investigation, Chauvin was charged with murder. He continued to restrain Mr. Floyd for two-minutes and 53 seconds after he became unconscious, although another officer suggest he ‘roll the man over on his side.’

“Derek Michael Chauvin caused the death of George Floyd by his culpable negligence, creating an unreasonable risk and taking a chance of causing death or great bodily harm to George Floyd,” the complaint said.

Floyd’s alleged crime was ‘passing a counterfeit $20 bill at a corner store.’

Prior to murder charges against Chauvin, riots occurred every evening, including the arson of a police station. The protestors demanded justice. I do not condone violence in any situation. However, I am and old white man, and I am incapable of understanding the level of anger in a crowd which was aware of hundreds of deaths of black men and women at the hands of law enforcement, without serious punishment for the offenders.

The mostly black crowd was attacked by your illegitimate president without regard for the family of Mr. Floyd. Trump used twitter to express his obviously racist opinions, the social media he has attacked all week for exposing lies from the orange buffoon about a voting by mail system proposed by multiple Democrats.

“These THUGS are dishonoring the memory of George Floyd, and I won’t let that happen,” the President tweeted early Friday morning. “Just spoke to Governor Tim Walz and told him that the Military is with him all the way. Any difficulty and we will assume control but, when the looting starts, the shooting starts.”

This is a President of the United States encouraging violence against American citizens, most of whom are peacefully exercising their first amendment rights.

If we are honest about this situation, we must return to the tragedy in Charlottesville, Virginia, in August of 2017 and discuss the contradictions in Trump’s statements. When a Neo-Nazi group marched down the streets, and were met by anti-fascist groups, one deranged member of the marchers drove his vehicle into the crowd and murdered a 15-year-old woman. 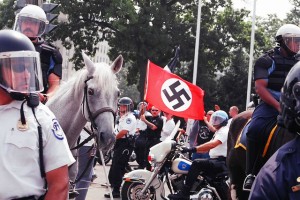 When Trump finally made a statement, He said, “there were good people on both sides.” He refused to denounce the men who supported him and his own extremist right-wing agenda. Trump has frequently been confirmed as the leader of white supremacy in America. In that same situation he never once offered condolences to the young woman’s family.

Today, singer and song writer Taylor Swift spoke out against Trump’s obvious prejudice and most significantly his suggestion that the Governor of Minnesota use deadly force. “After stoking the fires of white supremacy and racism your entire presidency, you have the nerve to feign moral superiority before threatening violence? When the looting starts the shooting starts’???” the pop icon tweeted.

She tagged Trump in her tweet, adding: “We will vote you out in November.”

Once again, I must point out a fact: an irrefutable fact. Trump is not an “American President.” The President of the United States must serve all 320 million people. He or she is not allowed to protect only those who support him or her. Trump represents less than 40 percent of all Americans, and none of them are black or Hispanic. He must be arrested and removed from office for crimes against the Constitution. He lied on January 20, 2017 when he swore to “preserve, protect, and defend the Constitution of the United States of America against all enemies, foreign and domestic.” His lies began on day one.