Tucker Carlson is a paid liar. He is employed by Fox News for the sole purpose of protecting Donald Trump’s lies and violations of the Constitution. On Monday, he moved away from the path dictated by the management of the right-wing propaganda machine and intimated that Trump had made some mistakes. This is heresy for Fox and the Trump Party.

Carlson’s first attack was against Trump’s incompetent son-in-law, Jared Kushner. After falsely accusing states’ governors for not embarking on aggressive action against  violent actions against the men, women, and children who were protesting our nation’s antiquated criminal justice system, he redirected his attacks to others who he believes failed his fascist leader.

He went after Jared Kushner, saying “no one has more contempt” for the president’s supporters than Trump’s son-in-law and senior adviser. He accused Kushner of breaking starkly from Trump’s platform and talking Trump out of taking decisive actions.

Over the last two days hundreds of protesters gathered in Lafayette Park, directly across from the White House. On Monday evening Trump cowered in fear as he left the residence and hid in the underground bunker hundreds of feet below the Oval Office.

“If you can’t keep a Fox News correspondent from getting attacked directly across the street from your house, how can you protect my family?” Carlson said on his show. “How are you going to protect the country? How are you trying?”

He continued: “On Twitter the next morning, the president reassured America that he and his family were just fine. The federally funded bodyguards had kept them safe. He did not mention protecting the rest of the nation, much of which was then on fire. He seemed aware only of himself.”

Okay, the truth. Carlson was exaggerating. Every law enforcement agency involved reported that the crowd in Lafayette Park never displayed any form of violent action. The only violence was at the demand of your illegitimate president who ordered police and military forces to force the protesters to leave the area and allow him a photo op in front of St. John’s Episcopal Church on Tuesday evening. 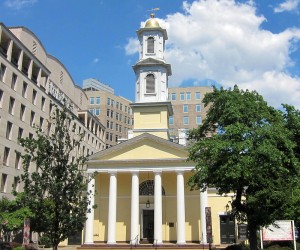 In my 73 years this was the most egregious violation of Constitutional rights by any president in our nation’s history. As the video revealed attacks on peaceful protesters exercising their first amendment rights with rubber bullets and tear gas, I initially believed I was watching a situation occurring in another nation. Trump is a criminal and a traitor to the American people and the Constitution.

Is this what Carlson and other fascist-minded people support? Is democracy non-existent in Washington today? Is this the end of our nation?

“Remember, democracy never lasts long. It soon wastes, exhausts, and murders itself. There never was a democracy yet that did not commit suicide.” John Adams

Is Trump’s illegitimate presidency the end of the American dream. Has foreign influence taken control of the future of the “great experiment?” Will our grandchildren be born into a fascist nation controlled by the super-rich? It’s your choice. If you choose not to vote on November 3rd, you are surrendering to Trump’s goal for the future of the United States.