This article will be mostly filled with quotes from the Mayor of D.C., Muriel Bowser, and your illegitimate and mentally incompetent White House bully.

The Mayor is supporting the first amendment rights of the people of her city to protest the federal government for its failures to protect black men and women from abuse by law enforcement. Trump is blaming the protesters and a leaderless organization, antifa, for civil unrest exacerbated by his failed administration. He has no viable evidence.

Mayor Bowser instructed the “works department” to rename a road leading to the White House, “Black Lives Matter,” which resulted in another Trump tantrum.

“There are people who are craving to be heard and to be seen, and to have their humanity recognized, and we had the opportunity to send that message loud and clear on a very important street in our city,” Bowser said at a press conference. “And it is that message, and that message is to the American people, that Black Lives Matter black humanity matters, and we as a city raise that up as part of our values as a city.”

“There was a dispute this week about whose street this is,” John Falcicchio, chief of staff for Bowser, a Democrat, said earlier in a tweet. “Mayor Bowser wanted to make it abundantly clear that this is DC’s street and to honor demonstrators who (were) peacefully protesting on Monday evening.”

Trump did what Trump does; he lied and attempted to misdirect his failures and acts of fascism.

President Donald Trump slammed Bowser Friday afternoon, tweeting, “The incompetent Mayor of Washington, D.C., @MayorBowser, who’s budget is totally out of control and is constantly coming back to us for ‘handouts’, is now fighting with the National Guard, who saved her from great embarrassment…over the last number of nights. If she doesn’t treat these men and women well, then we’ll bring in a different group of men and women!” 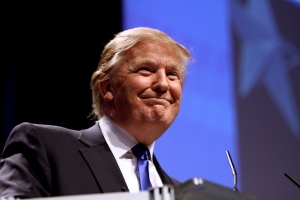 Of course Trump’s ego forced him to continue attacks against a Mayor who cares about her people. Trump cares about no one but himself.

“.@MayorBowser is grossly incompetent, and in no way qualified to be running an important city like Washington, D.C. If the great men and women of the National Guard didn’t step forward, she would have looked no better than her counterpart Mayor in Minneapolis!” he said in a tweet.

As Trump continues to misdirect the fact that he is completely mentally incompetent, we must begin laughing at him. Anyone who takes the orange buffoon seriously cannot claim average intelligence. Everything he says is a lie and every thing he does fails miserably. If Moscow Mitch McConnell and his cowardly party had not protected him for the last 40+ months, he would be hiding in his golden tower as he did in the White House bunker just days ago.

Trump is the worst thing to happen to the world in my lifetime. “Dump Trump” should be the mantra of every man and woman who loves his or her country.